Our research reveals the true impact of Instagram hiding likes

In June 2019, Instagram announced their plan to hide the number of likes a photo received from end-users to stop the platform feeling like a competition. They began their trial in a small number of countries and have since expanded beyond that globally.

Before the pilot began, there was controversy over what impact the new feature would have on the platform itself, its users and their engagement rates.

We wanted to find out how the loss of likes would impact influencers’ engagement rates, so we set ourselves a challenge. We tracked the engagement rates of influencers before Instagram removed likes and after the change came into effect.

In this post, we outline our findings to help brands and influencers understand why Instagram hiding likes doesn’t hinder their influencer marketing efforts.

We asked some of the brightest minds in influencer marketing to weigh in on their views:

“Instagram hiding likes means that there will be a heavier focus on content rather than metrics, which could be a great opportunity for influencer marketing.”

In general, when we look at nano and micro-influencers, they tend to have a higher engagement rate than influencers with a larger following. This makes sense. Generally, the fewer followers someone has, the increased chance they have a stronger, personal relationship and connection with their followers.

Influencers with 500k+ followers tend to have lower engagement rates because as their follower count increases, they’re unable to sustain the personal hands-on relationship other influencers with smaller followings have. 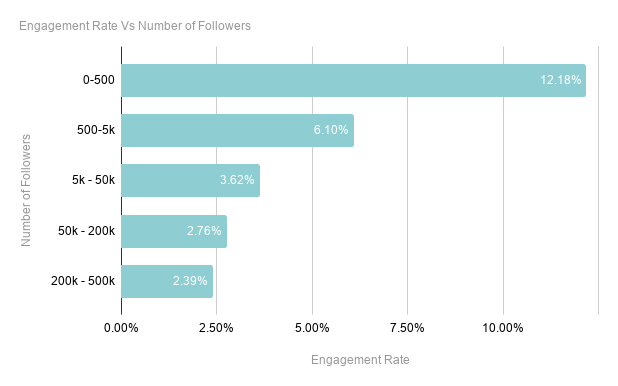 We analysed roughly 684,000 Instagram posts from influencers in Australia to measure the average increase or decrease in likes after the platform feature change. 16.47% of influencers with 50k-200k saw a drop in likes. Across the board, though, influencers saw engagement rates decrease as a result of Instagram hiding likes.

We put this largely down to the domino-effect. The domino-effect stipulates that you’re more likely to ‘like’ a photo if other people are. As a user, if you can no longer see the number of likes, you’re not compelled to ‘like’ it just because everyone else is. Instead, you focus on only ‘liking’ the content that actually appeals to you.

Initially, influencers might feel like the lack of likes harms their engagement rates, however, in actual fact, it encourages them to generate more authentic engagement. Users no longer feel obliged to like a post because everyone else is. On the flip side, they won’t actively avoid liking a post just because not many others have.

We also looked at engagement rates on an industry basis  to better understand whether some industries were more likely to encounter lower engagement than others. You may be shocked to learn that food and drink and parenting influencers saw the biggest decrease in engagement. Read the full report to find out how other industries performed.

Based on our previous insights, we would suggest the drop in engagement is not necessarily due to the influencer falling in this specific category, but again related back to the fact that some categories, similar to influencer buckets, tend to have a higher concentration of local followers.

Why were micro-influencers affected the most?

What might be most surprising from the chart above is smaller influencers with 0-500 followers were hit the hardest in regards to engagement rates.

Initially, this wasn’t what we expected. Our first graph showed smaller influencers having the highest levels of engagements, so why was it after likes disappeared their engagement fell significantly too?

To understand, we need to look at the graph below. This highlights the percentage of Australian followers each influencer has.

It might not yet be clear why % of Australian influencers is important, but we need to dig a little deeper. 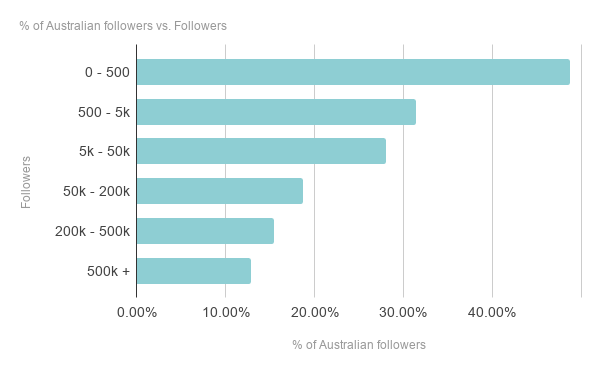 It now begins to make sense. As smaller influencers have a higher concentration of Australian followers, their engagement rate was hit the hardest as users in Australia couldn’t see the total number of likes.

Compare that, to influencers with larger followings; they often have a much more global audience who could still see likes during the pilot.

Now that Instagram has started rolling out the feature globally, brands an influencers should find other ways to prove their influence beyond simply using the number of likes.

Using a platform like ZINE, you can still view influencer’s engagement rates as well as advanced analytics such as total reach and average engagement.

For a detailed version of this data, download our report now.

What do you think of Instagram hiding likes? Leave your thoughts below