Second to Google, YouTube acts as the world’s largest search engine and second most visited site.

In terms of YouTube as a social media platform, it’s also the second most popular with 1,9 billion users. And with 400 hours of video uploaded to Youtube every minute, there’s tonnes of content for everyone to watch. The potential is endless. To put this into perspective, if you spent every minute of your life watching and consuming YouTube videos, in your lifetime, you’d never be even close to watching it all.

It’s no surprise then, that brands are increasingly reaching out to YouTube stars to help manage their influencer marketing campaigns.

If you’re on the fence about whether YouTube is a viable strategy for your brand, read on as we’ve compiled the best statistics that are still relevant today in 2019. 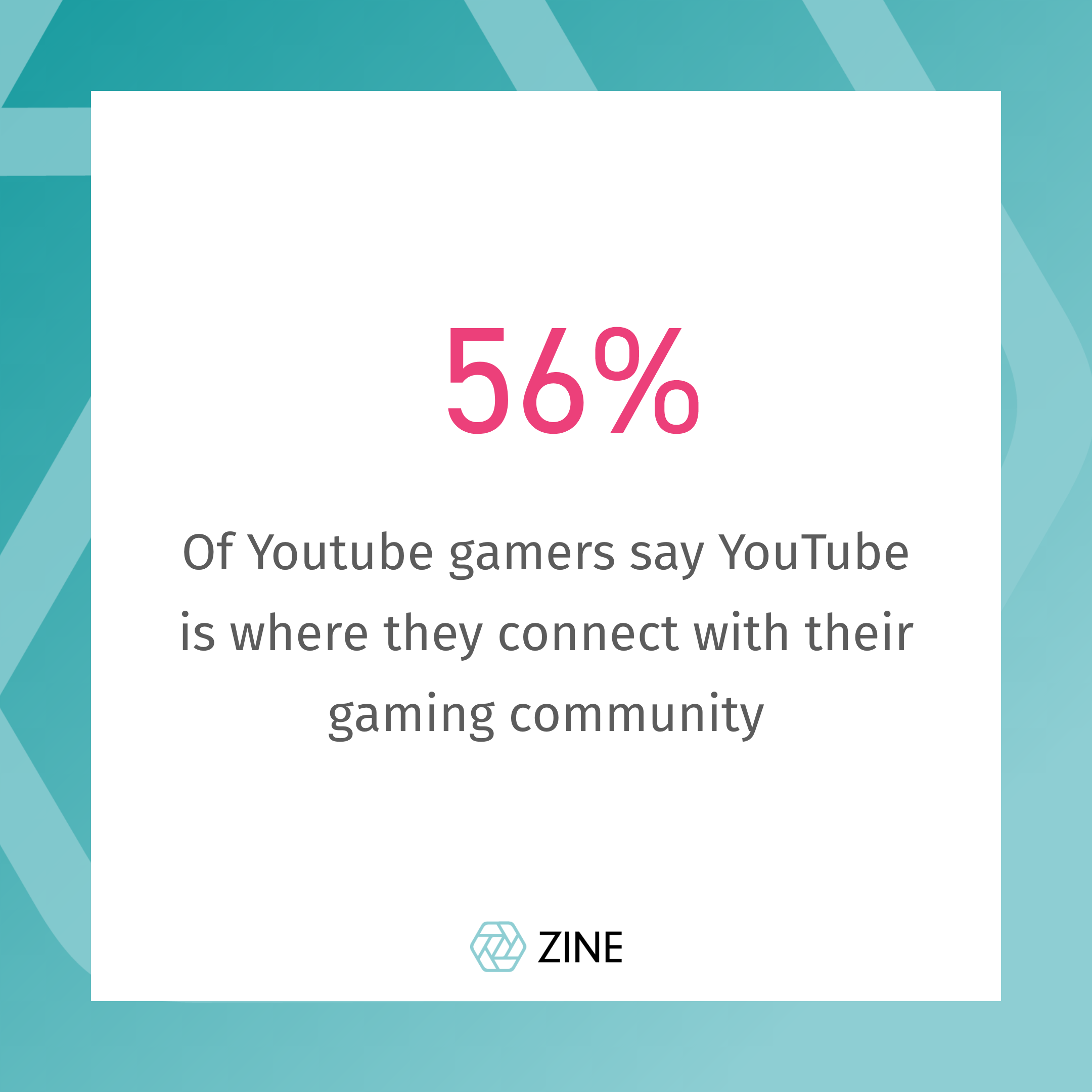 Successful influencers are able to build and create a community of like minded people with a shared interest in a particular topic. But every online community needs a home of its own. 56% of YouTuber gamers say that they use the YouTube platform to connect with their gaming community.

This might be through the YouTube live feature or perhaps just interacting with their viewers within the comments. If you’re a brand looking to work with YouTube gamers, think about also interacting with viewers in the comments, as long as your interactions feel natural and don’t seem like you’re trying to coerce them into a purchase.

3. 2 of the top 5 Youtube channels with the most subscribers worldwide are gaming-related

You might be surprised to know that 2 out of the 5 top YouTube channels are gaming related. This score is based on the number of worldwide subscribers. Given the huge gaming audience, it makes sense that you, as a brand, might consider working with YouTube gaming influencers but it’s not always the best idea for your brand.

If your products align with the gaming YouTuber’s audience, it could be worthwhile working with them. But when it comes to influencer marketing, the more relevant your ideas are to the audience, the better received you’ll find your campaigns are. 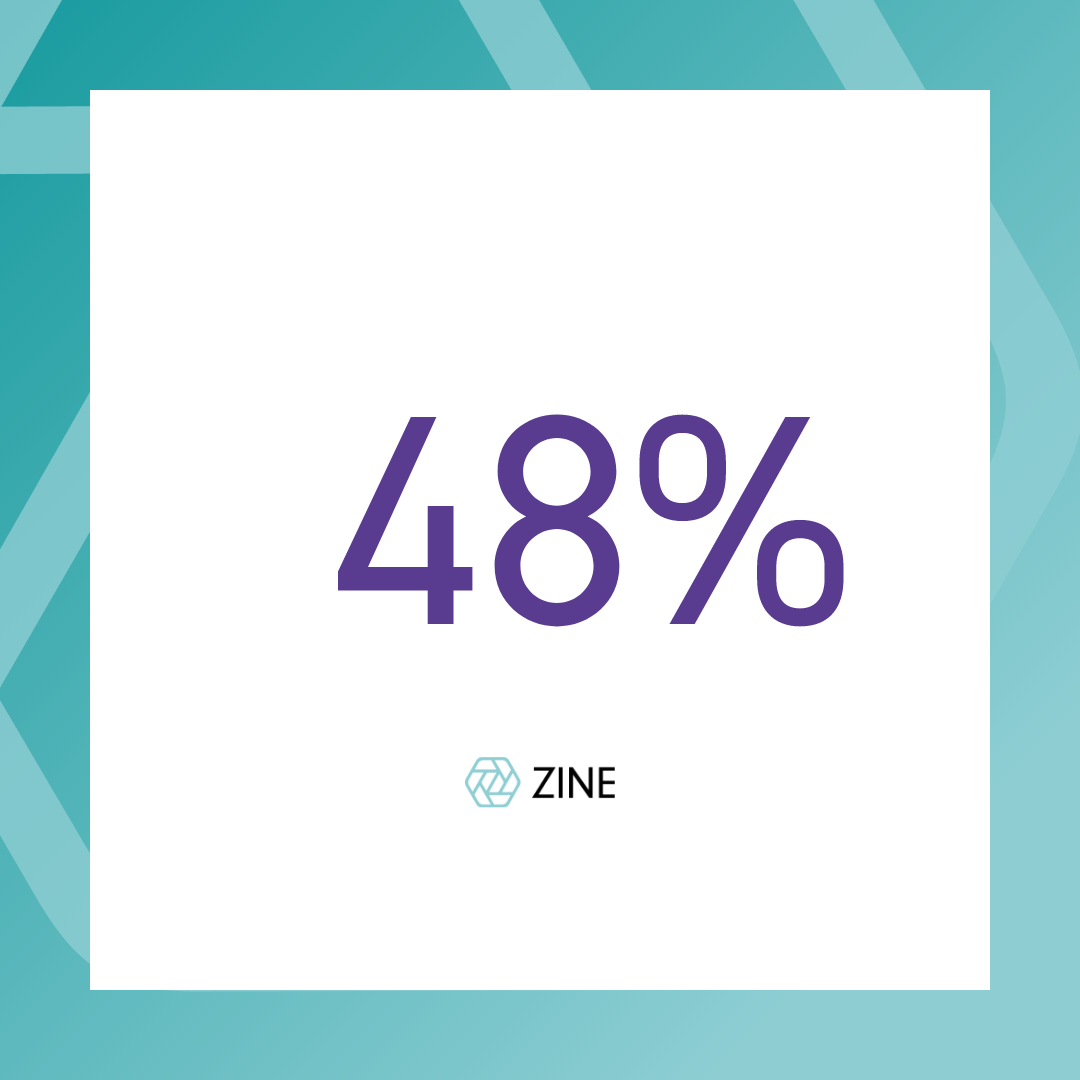 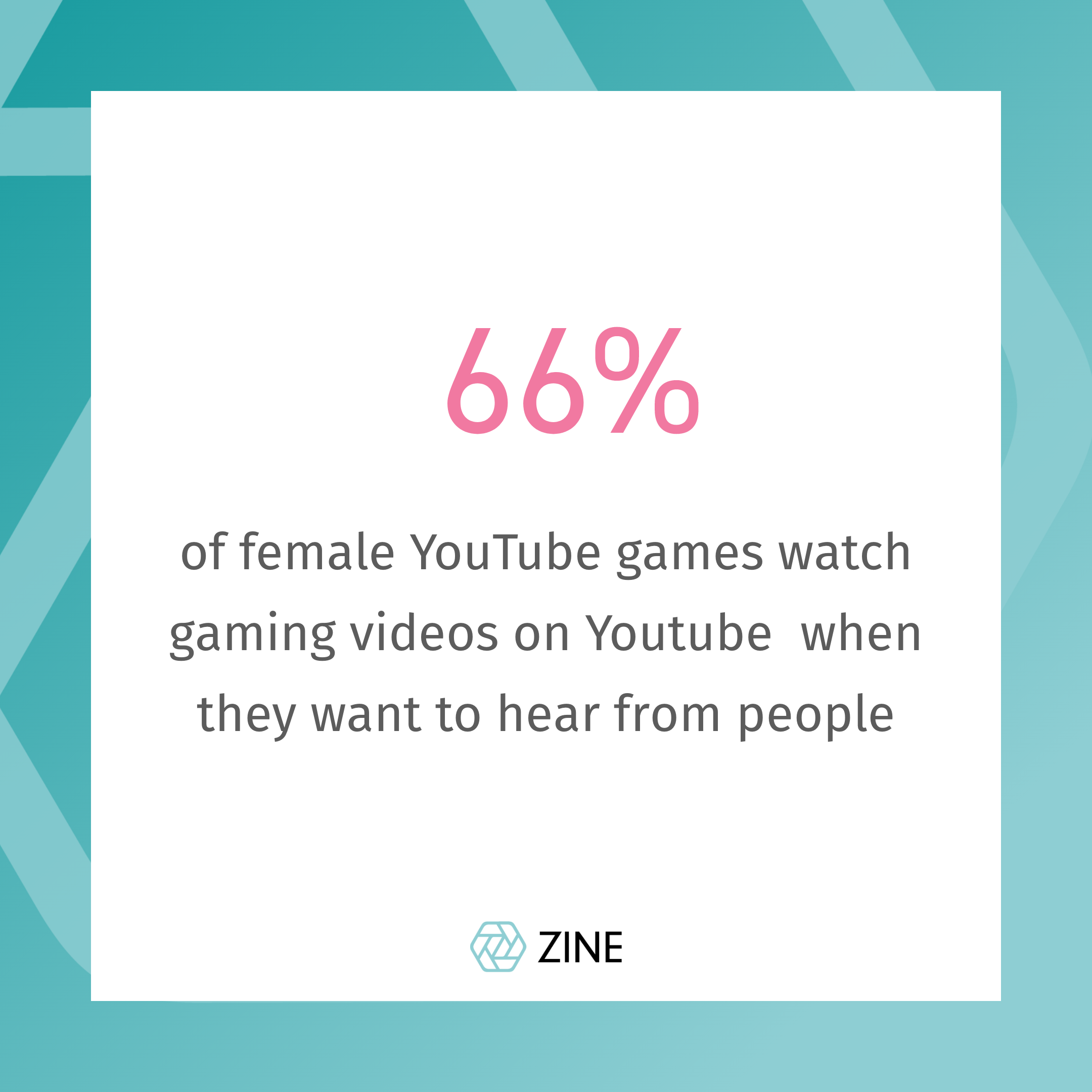 5. 66% of female Youtube gamers watch gaming videos on YouTube when they want to hear from people they can relate to.

It won’t be surprising to know that there are less female YouTube gamers than male gamers. So 66% of female gamers watch other female gamers as they enjoy listening and watching people who inspire them and they can relate to.

6. 74% of Youtube gamers say they watch YouTube videos to learn how to get better at a game.

7. The first video to hit one million views on the platform was a Nike advert featuring Ronaldinho

For brands who think YouTube won’t be beneficial for them, or that they won’t generate enough 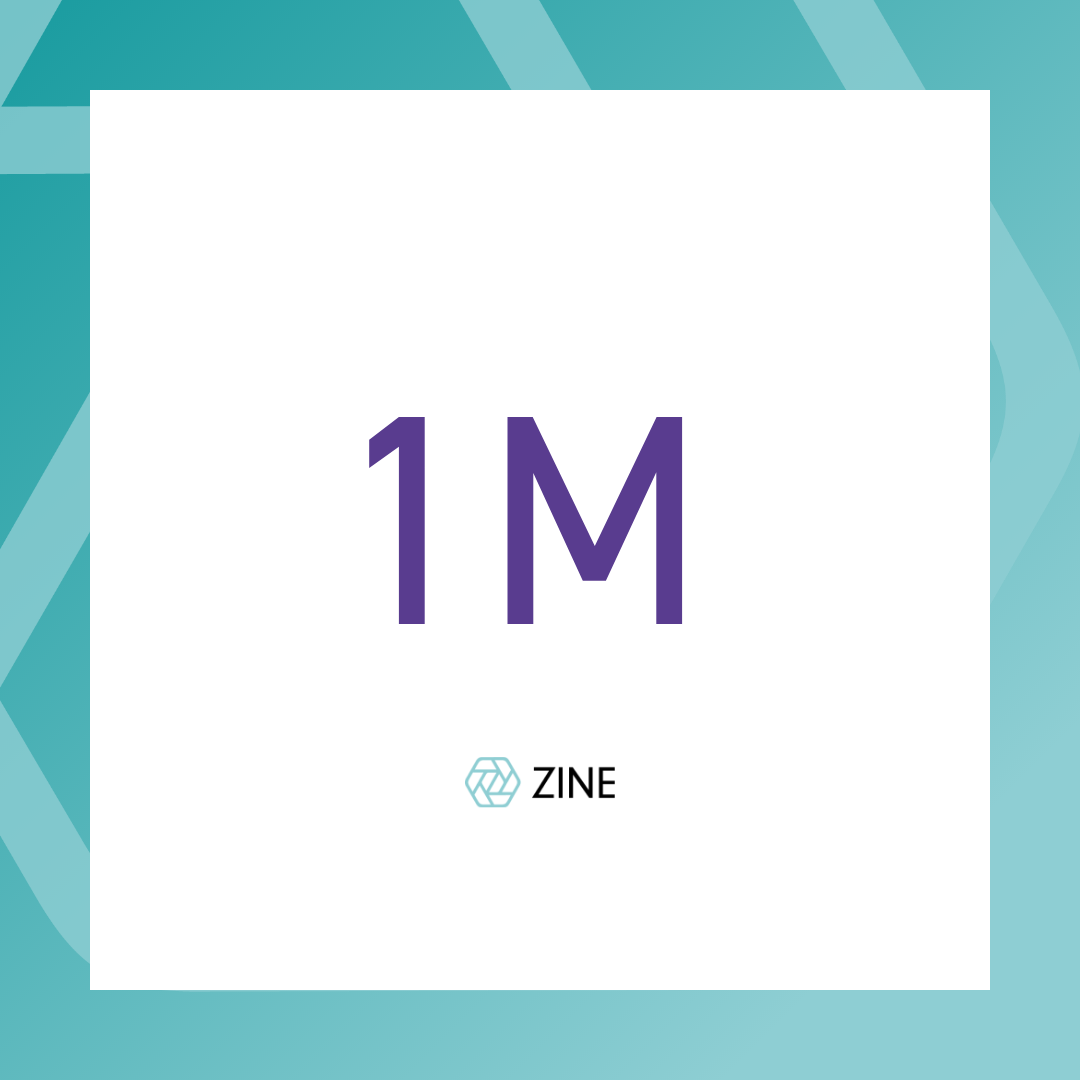 reviews for good ROI, think again. Did you know that the first YouTube video to hit one million views on the platform was actually a Nike video featuring footballer, Ronaldinho. This ad is by a brand and features an influencer meaning people do use the platform to consumer advertorial content from brands – and if they include influencers, you’re chance of success or virility increases.

8. Influencers are just as likely as celebrities to drive buying decisions. 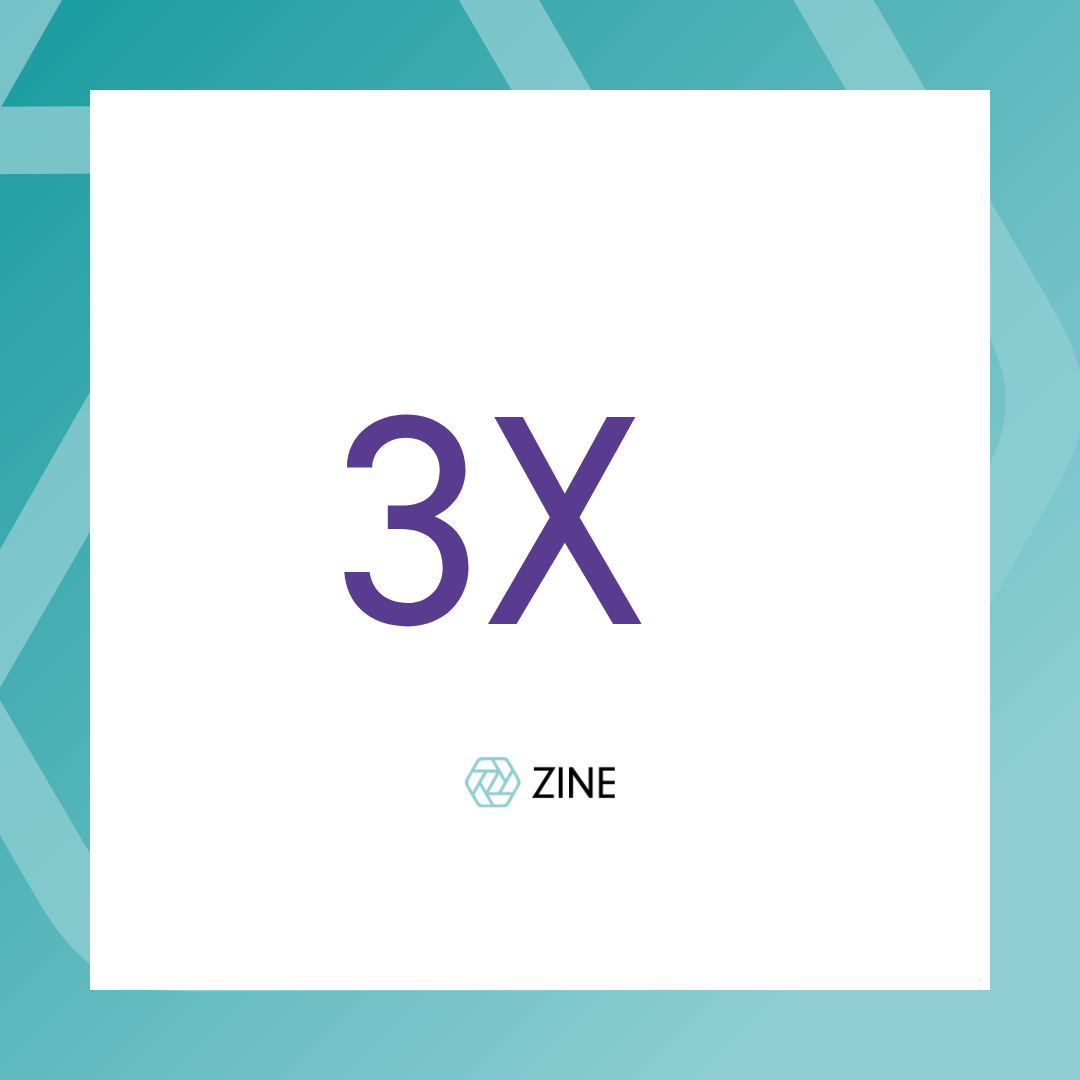 Even though traditional celebrities are becoming more accustomed to the relationships you can have with your audience through online mediums, they’re still unable to generate the same kind of views that YouTube stars can. This is probably largely due to YouTubers building a close relationship with their fans from the start of their career. For an audience, a YouTuber feels much more relatable than any celebrity would.

10. 7 out of 10 YouTube star subscribers relate better to their favourite YouTubers more than TV movie stars.

11. 4% of social influencer use YouTube as their primary social media platform 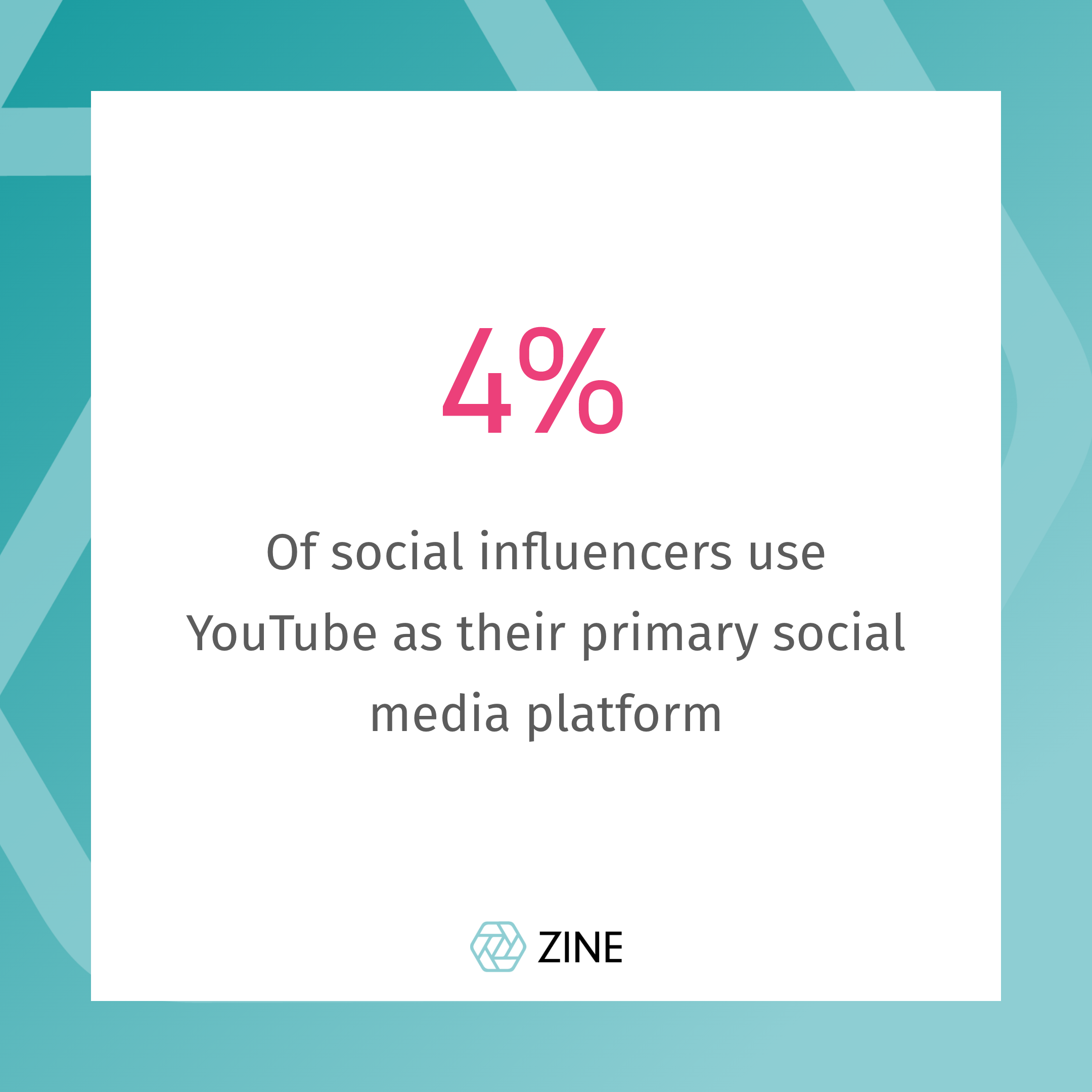 Often, people search for influencers within their target demographic and location. It makes sense. If your brand sells to people in the UK, it’s likely you’d want to also work with influencers based in the UK. But, if you’re a global brand, you should be pleased to hear that YouTube is localised in over 100 countries and 80 languages. 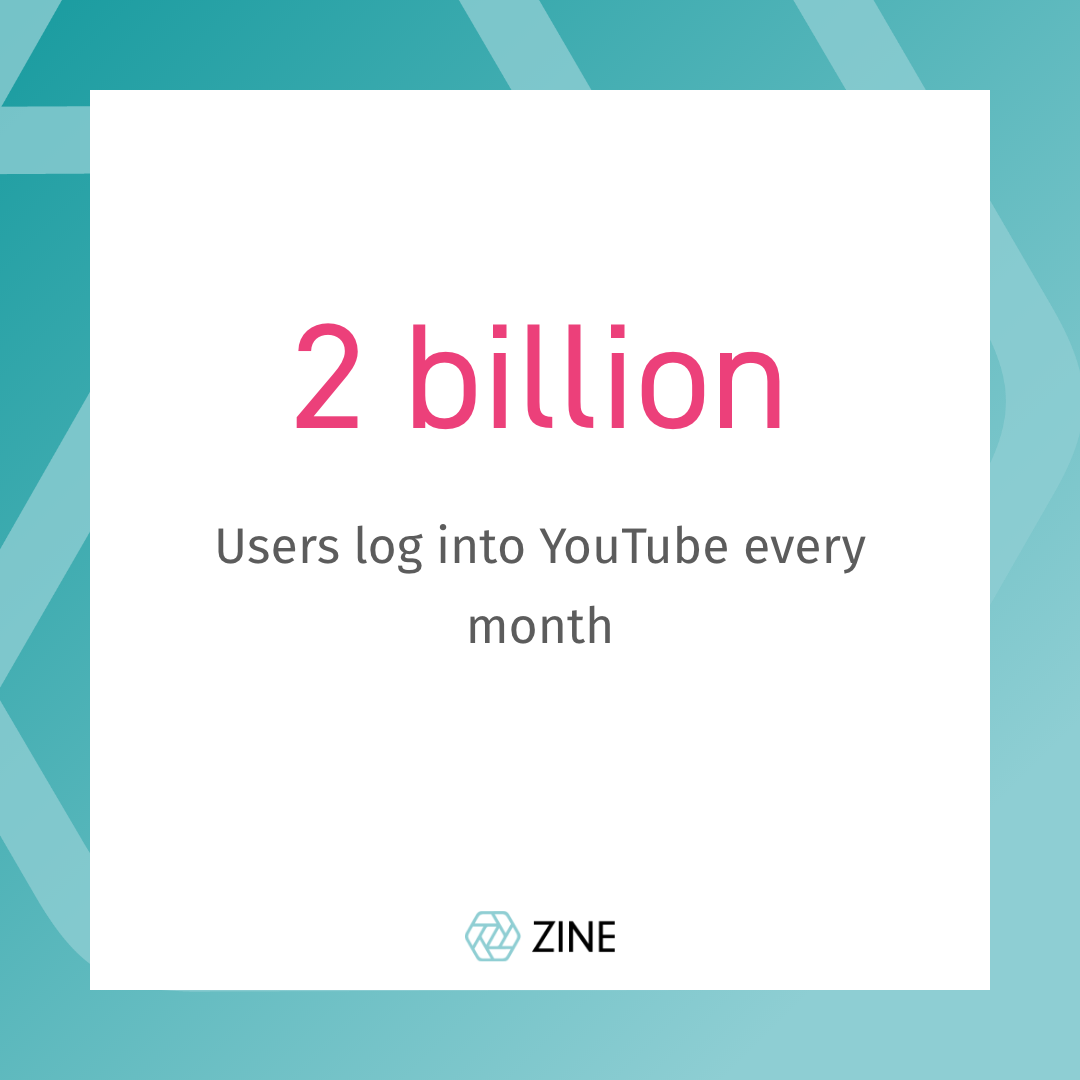 Over 2 billion users log into YouTube every single month. This, of course, doesn’t account for the people who consume YouTube videos without signing in. With so many eyes on the platform, every single day, there has never been a better time to get started with YouTube influencer marketing.

14. We watch more YouTube per day than Netflix (1 billion hours)

We all know about Netflix binges, but each day, more people watch YouTube than they do Netflix, on average. This is largely due to the wide range of content available on YouTube. No matter what you’re interested in watching, there will be a suitable video available for you in whatever genre you decide.

15. On average, a visit to YouTube on mobile will last more than 40 minutes

Not only do YouTube stars manage to capture an audience’s attention, but the average time spent on the platform (via mobile) often lasts longer than 40 minutes. There are few social platforms that warrant this much attention for a sustained time period. When we compare this to Facebook, for example, the user experience is different. When you log into Facebook, your attention span is lower. You don’t really know what you’re trying to look for. You’re simply scrolling through. Whereas when you log into YouTube, or open the app, you’re already committed to spending some of your time watching a video or two. 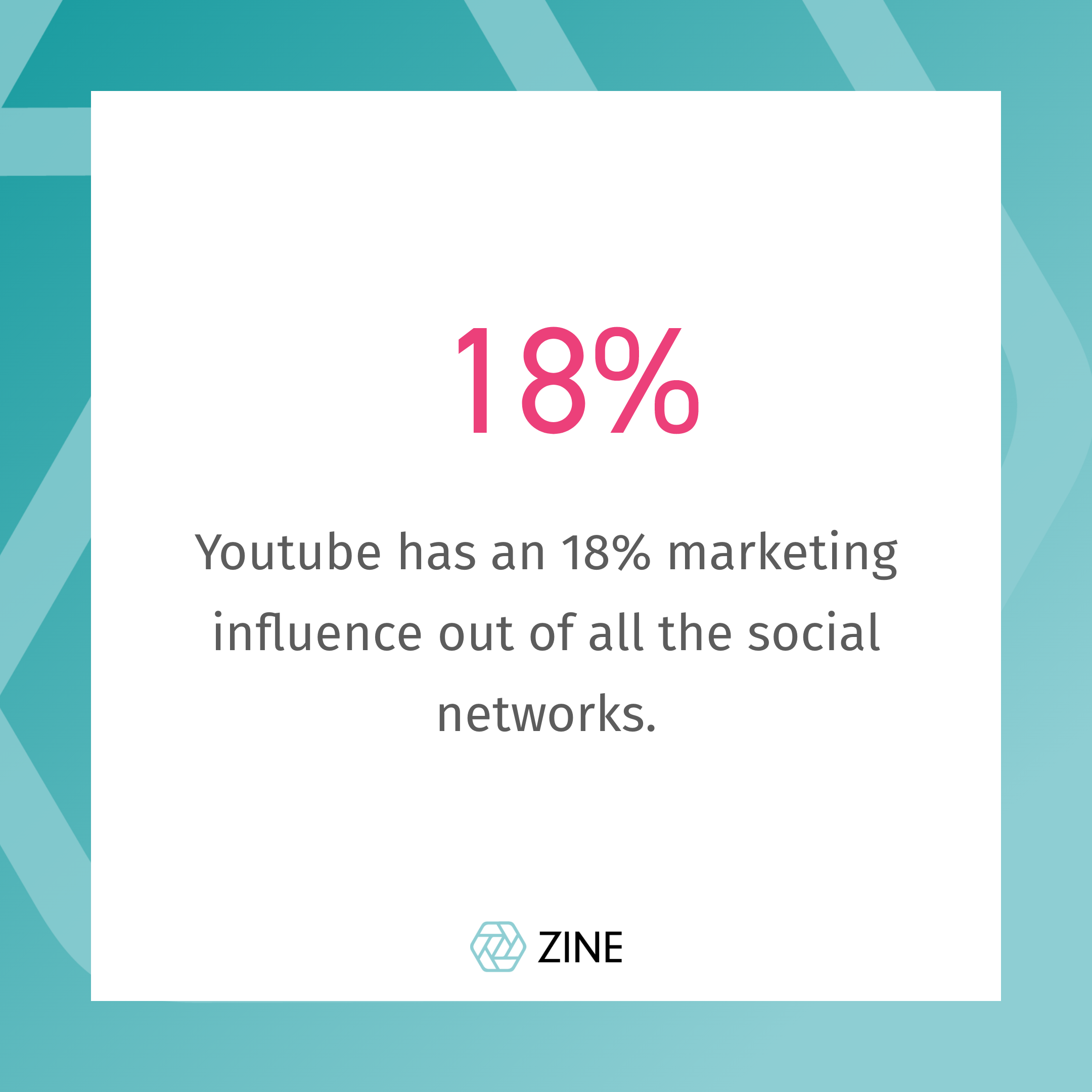 17. As YouTube is built up of celebrities, influencers and regular people, the platform has 18% marketing influence out of all the social networks.

18. If you were to equate time watched into years, then collectively we’ve watched over 50,000 years of product review videos

Before making a purchase, whether it’s big or small, people like to seek out feedback from other shoppers. This feedback could be reviews, testimonials or simply asking people in their network what their views were. YouTube is a great way for influencers to showcase products reviews as they’re able to visually show the product and talk about their experience with it. What’s more, as consumers we love to watch this content. If we were to equate time into ‘years watched’ – as a community – we’ve consumed over 50,000 years of product review videos on the platform. 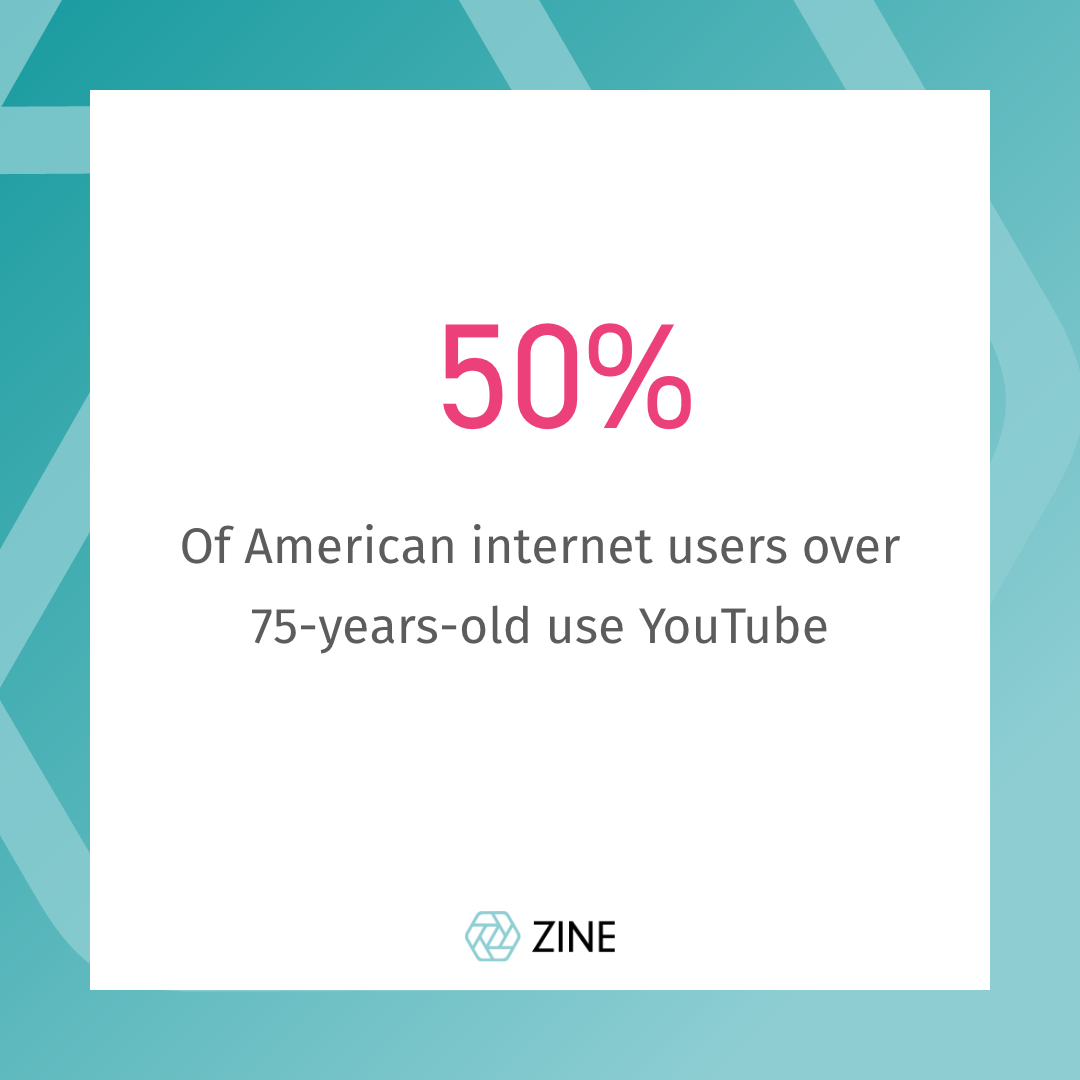 Despite America’s huge population, only 15.8% of YouTube’s visitors are actually American. If you’re selling a global product, you don’t have to rely on American influencers – who are often a lot more expensive to work with than influencers from other countries.

21. 50% of American internet users over 75 years old use YouTube

22. The video with the highest number of views is a music video “Despacito” which currently has over 6.32 billion views

Music videos get a lot of attention on YouTube as they’re a great way for artists to release new music videos. Currently the video with the largest amount of views is “Despacito”. 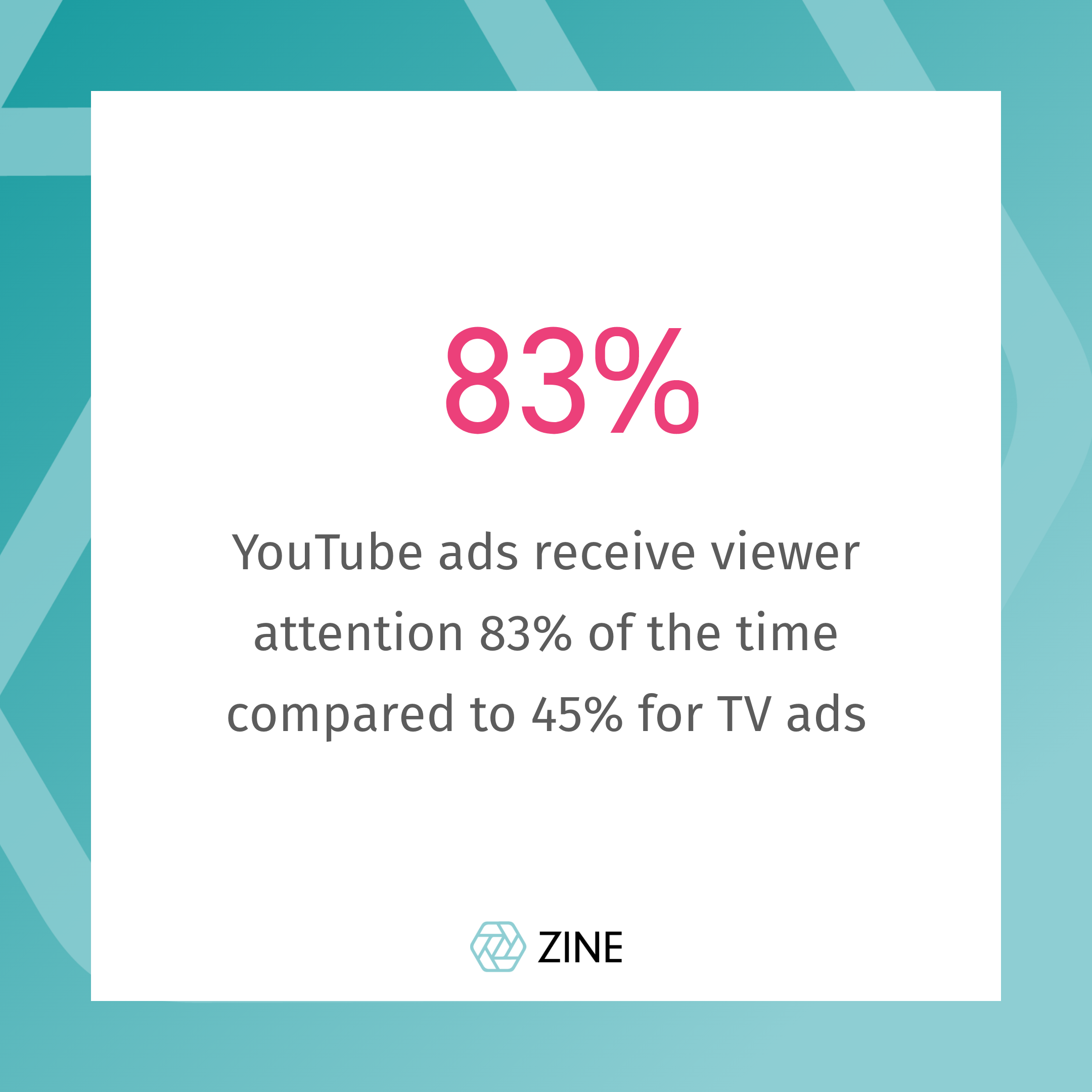 23. The most viewed non music YouTube video is “Masha and the Bear” which currently has over 4 billion views.

24. YouTube ads receive viewer attention 83% of the time compared to 45% for TV ads.

Typically, we’ve been conditioned to ignore TV adverts. With the rise of modern TV systems allowing users to record their favourite shows, viewers are now able to skip through the adverts they don’t want to watch. However, compared to YouTube, 83% of the time, ads receive viewer attention compared to 45% for traditional TV ads.

25. When a YouTuber amasses between 1-3 million subscribers, they’re able to earn around $125,000 per sponsored post.

If you want to work with the big YouTube influencers, you need to have a significant budget allocated. Because the views they’re able to generate, having a relevant product featured by one of these creators is bound to send your website or brand a tonne of traffic. But with the high price points attached, it’s really only a good idea to work with these types of influencers once you know their audience demographic matches the types of people you’re hoping to work with. 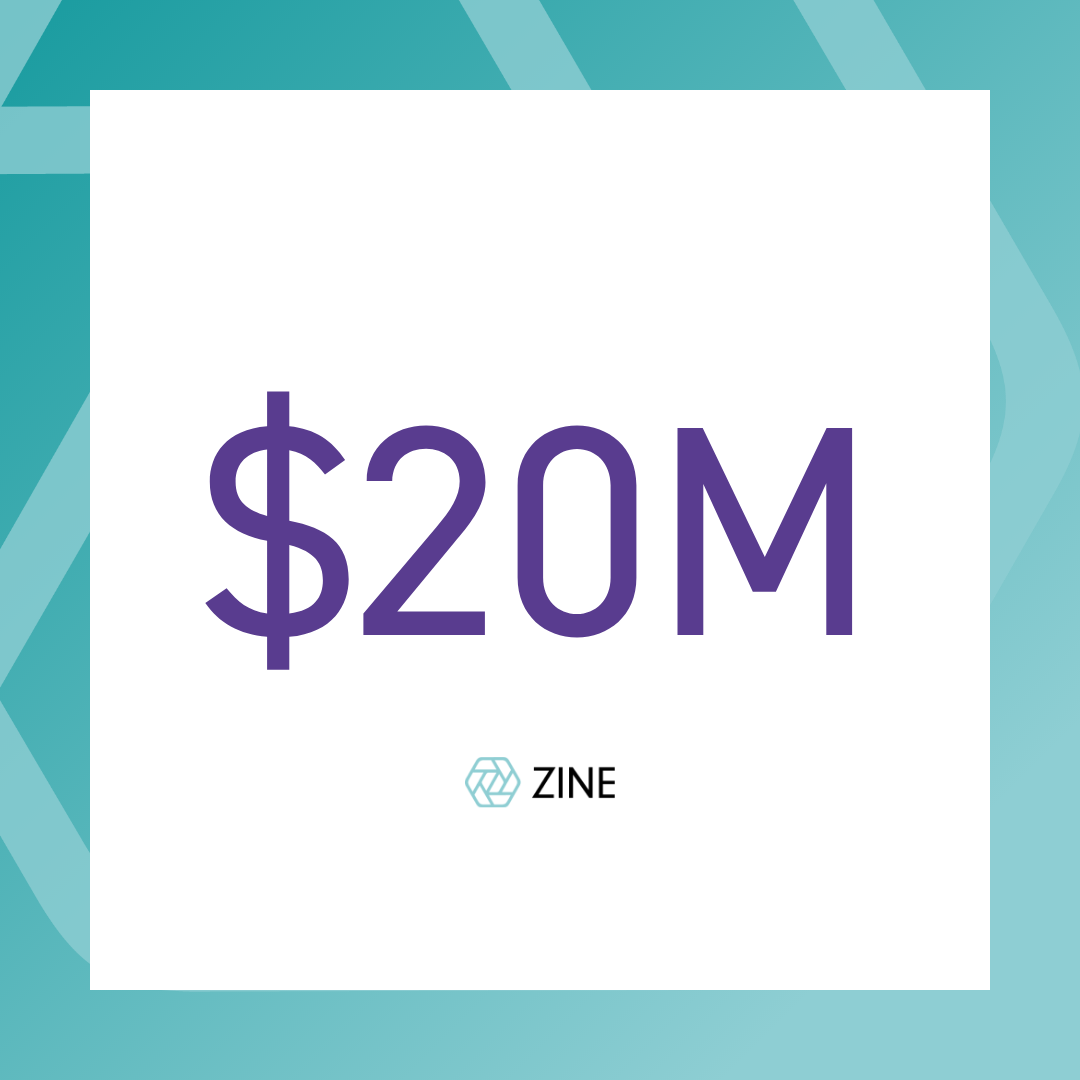 28. 70% of millennial YouTube users watched a video to learn how to do something new last year.

Now you’ve had a glance at the YouTube influencer marketing statistics that are still relevant in 2019, it’s time to start turning the data into action.

If you’re a brand thinking about the ways you can utilise YouTube for your influencer marketing campaign, use the best practices listed above to gain a good idea for how it should work best for your brand.