Did you know it’s been proven that experiences boost creativity and are easier to recall than products? That’s exactly why the smartest brands are taking influencers for an unforgettable trip of a lifetime.

This summer, influencers continue to dominate social media with brands sending them to the most luxurious destinations for the perfect getaway pics. For these brands when it comes to the gram, no expenses are spared. Influencers are being gifted the full all-inclusive holiday package from companies who aim to expand their reach and increase their ROI. Companies like Revolve, Tarte Cosmetics, Richer Poorer and AirBnb have mastered vacationing influencer marketing, with campaigns that go beyond expectations, proving just how valuable influencer content can be.

From #RevolveAroundTheWorld with extravagant holidays to #RevolveFestival full of Instagrammable moments and perfectly curated content during Coachella, Revolve are the masters of hosting influencer trips away.

Revolve’s presence at Coachella started way back in 2014 and has grown ever since, accommodating hundreds of influencers from 14 countries, during the highest engagement period of the year for most influencers. But they don’t just stop at capitalising on the season’s most fashionable event. Revolve also throw their own mini festivals where they have have styled over 450 influencers.

For the bigger influencers, such collaborations mean an abundant stream of Instagrammable content for their feeds that their followers definitely appreciate. For the less established influencers, working with Revolve can mean a bump in their following and a door leading to more opportunities. And for the company? Well taking influencers away and “breaking the budget” – Michael Mente, Revolve CEO, led to a $31m profit over $499m in net sales.

An estimated grand total of over $300,000 is what it cost Tarte cosmetics to take influencers to the Maldives. From private jets, to food and drinks all expenses were covered, so no doubt influencers had the time of a lifetime.

Though $300k may sound like a lot, note that a one page magazine ad can cost up to $250k. By taking influencers to the Maldives, Tarte got more than the one-off post they agreed. Influencers were constantly sharing their experiences on their stories and social media channels, giving their followers behind the scenes access, to their trip. Tarte Cosmetics managed to engage targetted audiences in seconds with single social media posts, whilst at the same time being endorsed by influencers, selling out products in a matter of minutes. 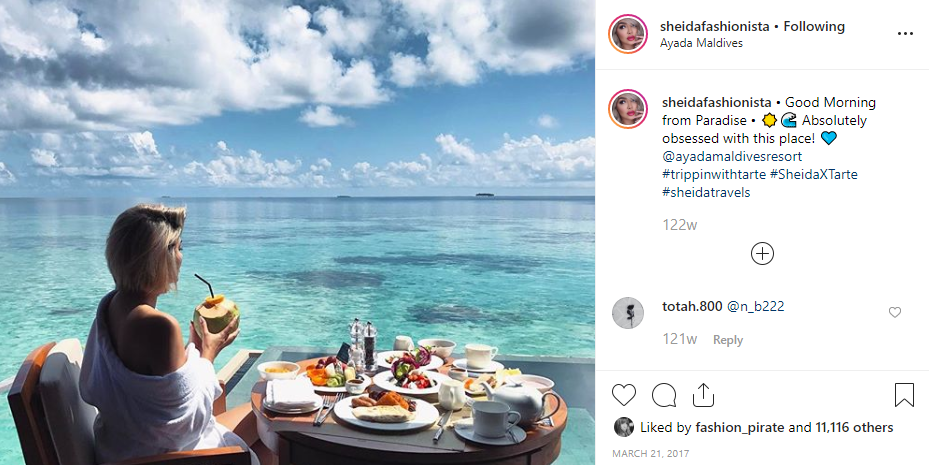 Airbnb are all about the social celebs, starting their influencer marketing strategies way back in 2015 where they invited Mariah Carey to stay in a luxurious mansion in Malibu. Her first post received a whopping 45,000 likes.  Since then Airbnb have worked with hundreds of macro-influencers aligning themselves with the celebrity lifestyle, positioning their brand as luxurious, and appealing to their influencers’ audiences, who want to get a taste of luxury living even just for a few days.

Over the course of the last few years, Airbnb has received over 18 million likes and 510,000 comments on sponsored posts, with an engagement rate of 4% and a combined reach of 966 million. Working with fewer, but bigger influencers Airbnb has achieved an immense reach and profound results, that go beyond the gram.

By covering travel expenses of $25,000 and no contracts involved at all to post content online, Richer Poorer’s “just more” influencer marketing campaign, wasn’t exactly a recipe for success. But against all odds, setting off to Honolulu with a small group of influencers paid off, as their ecommerce site received millions of impressions as a direct result, with influencers posting authentic content on their own initiative. Combining “post-trip”  marketing initiates like giveaways, gave the brand direct access to thousands of potential new customers as the brand’s follower growth soared.

I’m Head of Content at ZINE, where I use my expertise in fashion consumer psychology to empower brands and influencers in their marketing campaigns. I love to travel, bake as well as shopping online.