How Many Followers do you Really Gain by Going on Love Island?

Love Island might be over and our winners crowned (well done, Amber and Greg), but for the other contestants on love Island, their journey is just beginning.

Although some may go back to their previous roles as beauty therapists, pharmacists, or even firefighters, many will take an alternative route and become an influencer.

But just how much influence do these people have and if you’re a brand, what does this mean for your influencer marketing campaigns?

We’ve silently been watching the Instagram growth of the Islanders, and we’re excited to show you our findings.

For the islanders, this growth could result in huge payouts. So, for the contestants not lucky enough to snag the 50k, there’s still hope yet

We tracked Love Island 2019s Instagram followers to see how being on a national show like Love Island affects your popularity and influence on social media.

Tommy Fury, boxing champ was the first to get 1 million followers on Instagram, closely followed by his now girlfriend, Molly-Mae.

Out of the 36 people who stayed in the Villa in some capacity this season, 10 have since reached the 1 million milestone. This number is likely set to rise as they continue to keep themselves in the public eye.

How does your behaviour affect your following?

It’s true what they say, people will follow you if they love you and if they hate you. But how did the contestant’s behaviour on the show affect their Instagram growth. We looked at some key points within the series to find out.

Everyone hates a love triangle, right? Well, for Lucie it seemed her back and forth between different guys cost her extra followers. Once she left the villa, her growth slowed significantly, only gaining an average of 20,000 followers per day, despite being third quickest to reach 1 million followers. Compare, that, then to fellow contestant Amy, who saw increased follower growth even after she left the villa. Seems like emotional, authentic leaving speeches are key for gaining Instagram followers.

How much can the Love Island contestants expect to earn?

But working out an exact amount for how much these influencers will earn is tricky. First, many will charge more than the recommended amount and some will charge less. There is no general rule as to what the optimum amount to charge for a sponsored post.

New data from e-marketer suggests that influencers could now charge 0.0033p per follower per post.

So let’s see how that translates for some of our favourite Islanders. 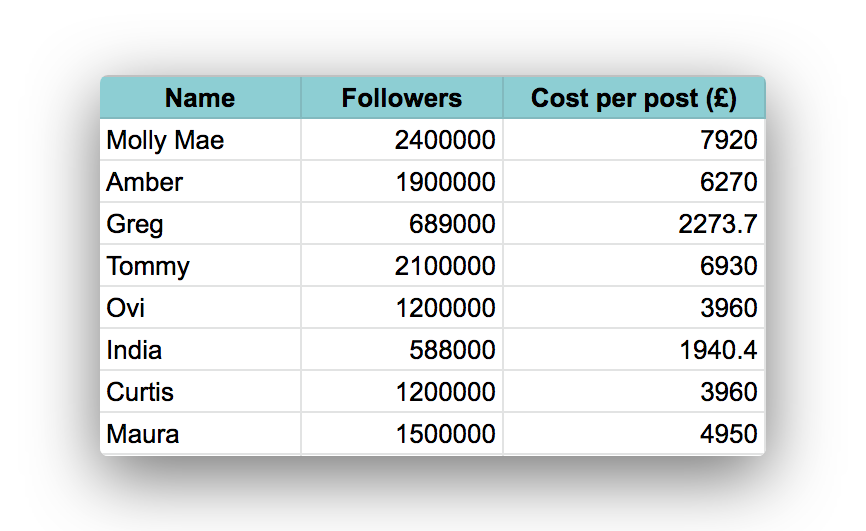 In the world of influencer marketing, followers are like currency. The more you have, the more you can charge to work with a brand.

But you’ll know as well as many how hard it is to find an influencer relevant to your brand. Not only do you need to make sure they have a similar brand image to you but you need to ensure their followers do too.

There’s not much point working with an influencer to sell something very specific to people in the United Kingdom if all their followers are based in Brazil.

We tracked the Islanders followers to see what the split was for Gender, Age and Location. It might come as a surprise that across the board, the numbers were relatively the same.

A majority of the Love Island audience is female. Sherif and Calum had the highest % of female followers with 85% and Lucie and Joanna had the lowest with 48% and 52% respectively.

In terms of age, our data highlighted a majority of the people who choose to follow influencers on social media were aged between 18-24. 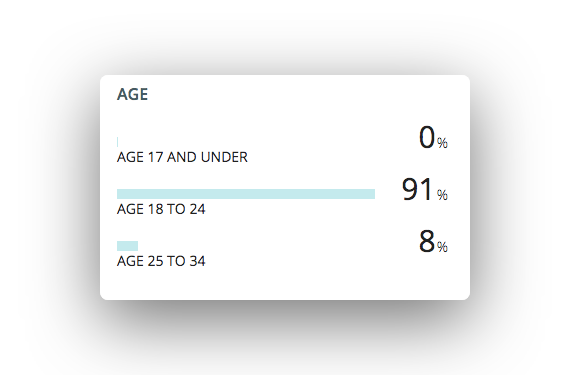 Despite Love Island often hitting global headlines, it’s primarily a UK National show and so it makes sense that our Islanders’ followers are skewed heavily towards the UK. It’s also interesting to note the increase in Irish followers, given two of the Irish contestants made it to the final. 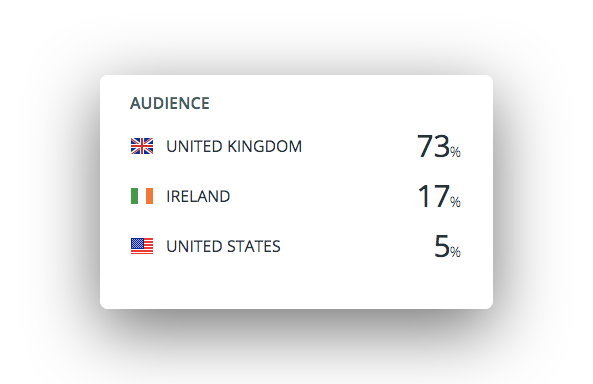 What this means for brands

In a world where people buy followers to inflate their influence and warrant more money, Love island contestants are strong candidates for people with real influence who gained their popularity by the merits of their personality and not by trying to game a system.

Love islanders have proven to have highly targeted audience in a specific age group and are certainly worth the spend. Whoever you choose to collaborate with in your campaigns make sure you know which audiences you’re reaching.